Changes in outcomes of immigrants and non-permanent residents, 2017

Immigrants admitted to Canada in 2016 reported a median entry wage of $25,900 in 2017, the highest recorded among immigrants admitted since 1981. Although the entry wages of recent immigrants have increased over the past few years, their income remains lower than that of the overall Canadian population. The Canadian Income Survey estimated the Canadian population’s median wage at $36,100 in 2017.

This analysis uses new data from the Longitudinal Immigration Database (IMDB), which comprises information on permanent and non-permanent (temporary) residents, including asylum claimants. It presents the type of information that can be extracted from the IMDB and its outputs to better understand how the socioeconomic situation of these individuals has evolved.

Not all immigrants face the same challenges after admission. Those who had work experience in Canada upon admission reported the highest median entry wages. For the 2016 admission year, income one year after arrival was $39,800 for study and work permit holders, and $38,100 for work permit holders only. These wages are comparable with those of the entire Canadian population. For immigrants who had no experience prior to admission, or who had a study permit only, incomes were $19,900 and $12,500, respectively.

Number of immigrant taxfilers one year after admission, by admission year and work experience in Canada prior to admission 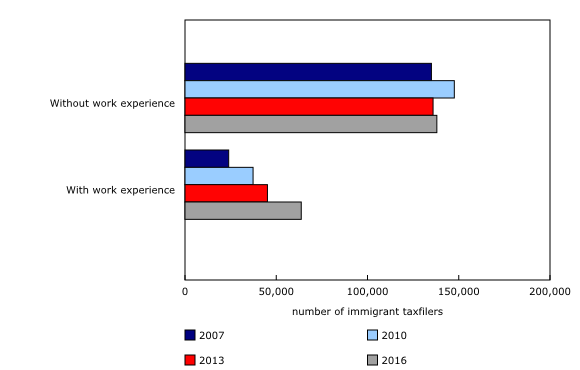 Wage catch-up factors include pre-admission work experience, which facilitates integration through increased knowledge of official languages and the development of professional networks in Canada, among other things. In 2017, immigrants admitted in 2007 who had held both a study permit and a work permit prior to admission had the highest median wage (up 81% to $63,800), and their wage exceeded that of immigrants who held only a work permit (up 36% to $48,100) and that of Canadians as a whole. The median wage of immigrants admitted in 2007 who held only a pre-admission study permit increased significantly over 10 years (up 163% to $37,600) and now exceeds the median wage of immigrants without pre-admission experience (up 72% to $30,700).